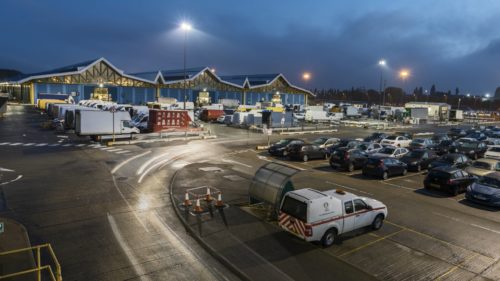 Welcome to the New Spitalfields market film premiere, which charts a day in the life of the UK’s premier fruit, veg and flower wholesale market.

The eagle-eyed amongst you will note that there isn’t much of what we generally refer to as ‘day’ involved, but the working day of a market trader begins at somewhere around midnight and ends in mid-morning, when the vast majority of us have other things (or nothing at all if we sleep that soundly) on our minds.

The film was shot and produced by David Rust of Lagoon Media. David is a former BBC producer who now runs his own production company. He had filmed in all of London’s wholesale markets before and was delighted to get the call from Jan Hutchinson at the Spitalfields Market tenants Association.

“Jan wanted to produce a film that shouted about what the market does and who the people are to both the trade and also the general public. There was no specific geographic remit; the idea was to use social media to put out a film that shows a day in the life of the market. A corporate approach would just get lost, but social media will allow the market to show how much life there is in the market to people who are unlikely to ever experience it.

“For a film maker like me, a wholesale market is gold dust! You just cannot go wrong. What I am looking for first of all is characters, either visually or characters in an interview situation. As this didn’t involve interviews, we approached it as a visual snapshot and the characters really come through even though they say nothing. There are people from every nationality, colour and creed at Spitalfields and that comes through in the film too,” he said.

“It is also so vibrant. There is also so much activity and energy in a wholesale market, you just can’t stand still with a camera and – once you have the requisite permission from the landlord, of course – all you need to do is park yourself in a safe place where you won’t get bowled over by a forklift. The pictures just leap out at you – like fishes jumping into a fisherman’s boat!

“I know wholesale markets quite well, but you never quite know what the final film is going to look like until you sit down in the edit suite. I knew we had fantastic footage and because of the colour, the vibrancy and the characters, it was one of the easier edits as the hard work was done – even if that only involved us pressing the record button. It was really enjoyable.”

He adds: “The film gives that warm, nostalgic filming. The multinational aspect of the market we get across with the visuals, but I also wanted to get the personal aspect across. It’s not just a busy working market; I wanted to convey the warmth and personalities of the individuals and so the portrait shots of traders looking at the camera briefly are a good way of personalising the market for the viewer. The people we filmed really engaged with the camera and I think that shows that they are really proud of what they do.”

Jan Hutchinson is pleased as punch with the final cut. “I think David’s done an excellent job of distilling the working day of our market into a short and fascinating film,” she said. “There are many faces from the market in here for you to spot and also lots of customers. We hope you enjoy watching it; let us know if you’re in it and we’ll give you a mention when we pick up the award in Cannes!”