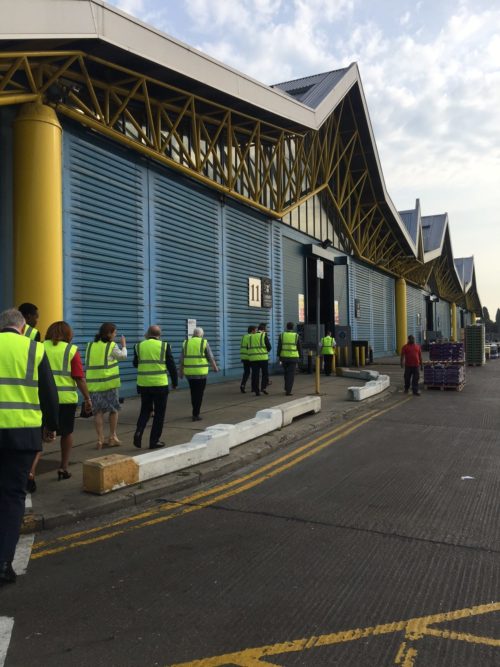 Christmas comes but once a year, of course, and so does the visit of the Lord Mayor of the City of London to New Spitalfields (bear with me, it’s not as tenuous as you think!).

Unfortunately, the 2017 visit coincided at late notice with the Official State Opening of Parliament, so this year’s Lord Mayor Andrew Parmley had pressing duties elsewhere. However, his Sheriff William Russell was a more than able deputy and led a civic delegation including amongst others the local Mayor, several representatives of the City of London Corporation, the Master of the Worshipful Company of Gardeners and a Past Master of the Worshipful Company of Fruiterers.

The delegation was given a tour of the market led by Chris Hutchinson, chairman of the Spitalfields Market Tenants Association and Ben Milligan, the market’s superintendent. On a piping hot day, they were then treated to a traditional market breakfast, after which Chris told the party that the summer months are the market’s “Christmas”.

“People often remark to me that November and December must be great months for the market in the run up to Christmas. But May to July is when we are at our busiest,” he explained. “The weather can be our best friend and our worst enemy, but just recently we have been very busy and long may that continue.”

He added that 26 years after moving to the current market site, the partnership between the tenants and their landlord, the Corporation of London (of which the Lord mayor is the head) remains strong, and praised the work of the superintendent to not only vastly improve health and safety in the market, but also eradicating smoking from the site. “I think there are a lot of landlords who could learn some lessons from the work done here,” Chris said.

There was some discussion around the breakfast table about the potential for a composite market, bringing meat, fish, fresh produce and flowers under one roof. Chris said the potential benefits would be great and that there is a on-going dialogue between the Corporation and the markets. “There is certainly some research being done,” he said. “I’m sure we would all be very proud if we could achieve such a thing.”

The Sheriff told the room how impressed he had been with the market, remarking on the Bangladeshi lemons he had seen as an example of various produce that he either had no idea about or could not name, despite his regular travels. He said the commercial and cultural diversity of the market made it an important driver of international trade for London and noted also the role that multicultural sites such as the market can play in ensuring that London has a more harmonious future after a depressing few weeks and months.

Chris presented the Sheriff with a cheque for £500 for the Lord Mayor’s Appeal, which this year supports LSO Discovery programme, St Paul’s Music Outreach and Music in Hospitals, enabling them to continue their valuable work into the future.

He also related a story about a recent incident in the market, when two quick-thinking members of the market constabulary (Geoff and Adam) saved the life of a Spanish lorry driver who had a heart attack as he stepped out of his truck. His life was saved by a combination of their training, quick thinking and the fact that the market had two defibrillators on-site and Chris, Geoff and the Sheriff revealed that in recognition of the incident, another defibrillator has now been added to the set. “This is a good place to have a heart attack,” joked Chris, adding: “In all seriousness, having defibrillators has already saved one life and while we clearly don’t want them to be used, we know how valuable they can be.”