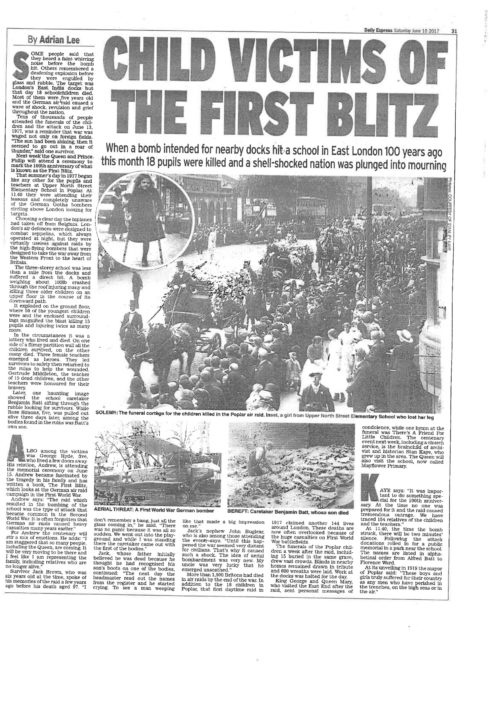 New Spitalfields Market donated fresh produce and a fruit basket to a commemorative event at a local East End school in Poplar on June 15.

The photo above this article is of a newspaper article that appeared in a recent Daily Express about the bombing of the school 100 years ago, during the First World War. Eighteen schoolchildren died in the bombing, most of them five years old. Their names are listed from A to Z on a memorial near the school.

The market was of course providing fresh produce and flowers to this tight-knit community at the time and no doubt many of the traders and their families would have been amongst the tens of thousands of people who attended funerals amidst a wave of public grief. 100 years on a commemorative service for what is known as The First Blitz was held at the local church, followed by a visit to the school by HRH The Queen and The Duke of Edinburgh.

The centenary event at the school, since rechristened Mayflower Primary School, was created by local historian Stan Kaye, who grew up in the area and more than 150 relatives of the children and teachers have been traced. At the time the bomb truck, 11.40am, there were two minutes silence. Click here for a story and pictures of the Queen’s visit.