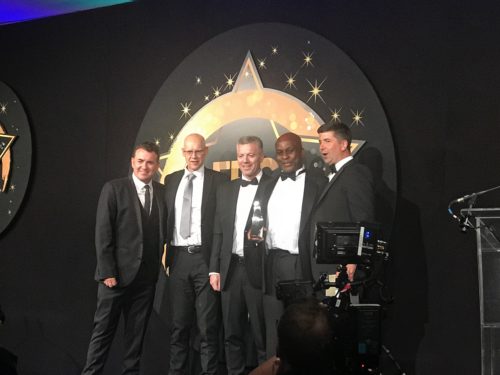 New Spitalfields spends a week in the spotlight

On Tuesday June 5, New Spitalfields was the sponsor of the Wholesale Supplier of the Year category at the 2018 FPC Fresh Awards, held at The Pavilion, Tower of London. During a fun-packed evening hosted by one of our fellow Eastenders, Shane Richie, The SMTA’s chairman Paul Walker presented the award to GT Produce of Leeds, which beat Total Produce UK and last year’s winner George Carruthers of Glasgow to take this year’s prize.

The following evening saw the market well represented at the cocktail reception that kicks off the annual London Produce Show & Conference in such fine style at Grosvenor House on Park Lane. As ever, there was a wide array of professionals from around the produce world present to #celebrateFRESH in advance of the trade show on the following day.

The market had a double booth this year in the trade exhibition on Thursday and SMTA chief executive Jan Hutchinson reported it being the busiest day at the show that she’s had in its five years. This was no doubt helped by a magnificent display of fresh produce and some sparkly new pull-up banners as well as Guess The Veg competition, which sparked plenty of interest. Jan also presented a basket of fruit to to Chisenhale Primary School, the winner of an art competition run in East London by The Gardeners Livery Company.

On Friday morning, a truly international group of produce professionals and students descended on the market for a London Produce Show tour of the facilities and a talk with Jan and Ben Milligan, the market’s superintendent. The visitors left in no doubt that the market remains a vibrant and vital part of the fresh produce supply chain in London and the South East and were able to see the incredible diversity of products and cultures that New Spitalfields boasts.

“It was an incredibly busy week, but very rewarding for the market,” said Jan. “The London Produce Show is a great platform for London’s wholesale markets to showcase their on-going value to the industry and by engaging with a global audience, we continue to spread the word about what we do and create new business opportunities for our traders.