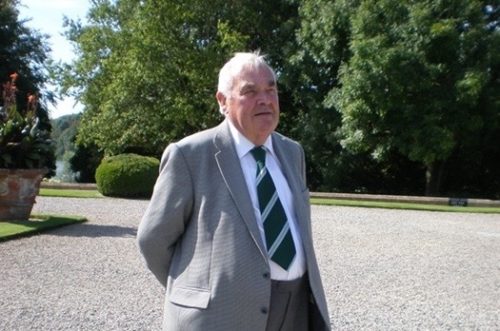 Laurence Eldred, who had made his mark on Spitalfields Market over more than seven decades, died after a short illness earlier this month, having been taken ill on his 90th birthday. His son Martin provided us with the following tribute in memory of his father and we publish it with the best wishes of everyone at New Spitalfields Market to the family, colleagues and friends of one of the market’s great supporters and characters.

Born to a Nurseryman and Midwife, Laurence was gifted one thing from his parents: incredible good health. Leaving school at 15 his career began selling sacks of potatoes off a pony and trap around Epping, Essex.

After serving his apprenticeship working on his father’s nursery, stoking the coke ovens and delivering his cucumbers and tomatoes to Spitalfields Market, wholesale and retail lured him away.

The early break came when he purchased an Essex Potato Merchants Licence from Peacey and Cameron. This enabled him to source produce throughout East Anglia delivering them into the London markets. He was forever thankful for the support the Essex growers gave him, especially Strutt and Parker Estates.

After securing the lease on a retail shop in Epping High Street, Laurence decided he needed to buy a stand in Spitalfields Market to complete the chain.  This came in the form of B.W. Bookers, vegetable wholesalers. Life in the 60’s and early 70’s, pre-dating the supermarkets, was exciting and dynamic.

Trading produce as well as wholesale stands was like trading stocks and shares to Laurence. One of his most successful potato businesses has been Daniel Hart Holdings, which was initially managed by ‘young’ Dave Kinane and latterly, trading as Booker Hart Ltd, by Tim Williams and his team.

An opportunity presented itself when James Ruane, the trade’s premier wholesaler and importer decided to sell out. Being close rivals, it was like David taking on Goliath. This transaction was carried out seamlessly, thanks to the support of the resident management headed up by Hughie Young.

Buying James Ruane opened new doors, mainly the world of importing and processing factories. The former took him on many buying trips to Cyprus as well as the Canary Islands, sourcing early potatoes and carrots. Not all boats were winners, and the experiences with Indian onions were especially painful.  The logistics of bringing produce from Jalandhar in Punjab, India to England was somewhat testing!

The second key was Ruane’s contacts in the crisp industry. In the early 70’s, working closely with United Biscuits (KP Crisps) and Smith Crisps (Walkers), Ruanes grew its potato warehouse merchanting business to 30,000t/annum. This was centred in Doncaster, South Yorkshire, sourcing supplies from Catterick in the North to North Walsham in Norfolk.

Complimenting the produce business required fleets of vehicles as well as general warehousing.  With his distinctive livery of red, green and gold, Laurence took great pride in the Eldred colours. Spotting the trend in distribution patterns with his son, Richard, the Pallet Network (TPN) was started in Harworth, Doncaster in a T2 hanger. With key personnel joining the business from Norbert Dentressangle, this business flourished and grew.

Warehousing and property were equally close to his heart. Trading from three industrial estates in Yorkshire, the Eldred Group services the rail, chemical industrial, engineering and power sectors, as well as many importing businesses.

Work was a pleasure to Laurence and he couldn’t understand why anyone wouldn’t want to work seven days a week. On Boxing Day 2017, instead of watching Doncaster Rovers play football with family, he decided to visit the three sites in Yorkshire for a tour of inspection. In particular, he viewed his new 40,000 sq ft high bay, racked warehouse to see if he could find some faults with the build programme.

Laurence was an extremely proud man. He was honoured to serve as Honorary President of the Spitalfields Market Tenants’ Association. Current chairman of the SMTA Chris Hutchinson said Laurence’s contribution to market life had always been “much appreciated and his opinion valued”.

To be life President of his North Weald Bowls Club also gave him great enjoyment, competing in matches more in his 90th year than ever before.

His firm in New Spitalfields, Booker Hart, will continue to trade as normal.